Feminist week for a new economy 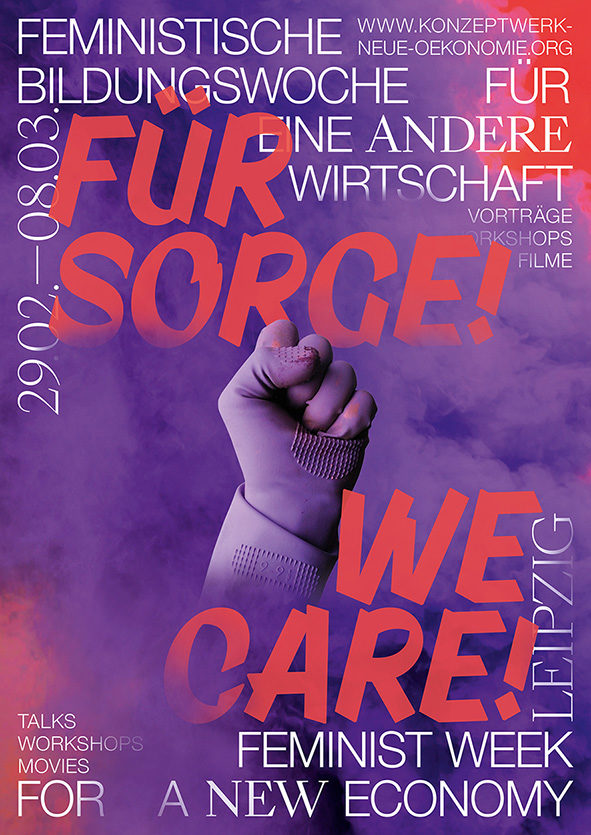 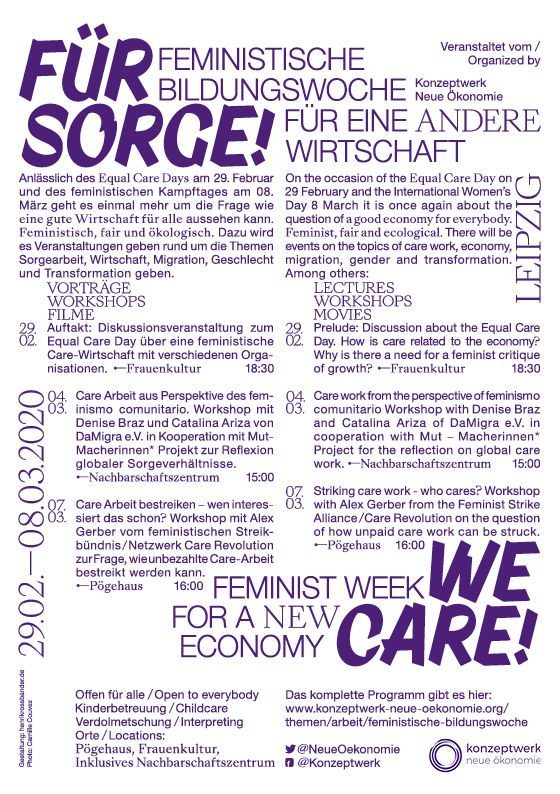 Below you will find the schedule for our feminist week. All events are free of charge. Donations are requested. Childcare is provided. If you need childcare, please inform us in advance at a.mirasyedi@knoe.org. Some events will be translated into other languages, like english, spanish, french and arabic. If other languages than those indicated are needed, please also send an email.We look forward to exchanging ideas with you!
zur deutschen Version

The event is part of the Equal Care Day. The Equal Care Day is an initiative of klische*esc e.V. and was initiated in 2016. It aims to raise awareness of the fact that in our society, care work is often not valued highly, if valued at all.

How is care related to the economy? Why is there a need for a feminist critique of growth? What would happen if care work were to be at the center of the economy? We would like to discuss these and other questions with you and our guests at the Equal Care Day. Guests are: Medinetz Leipzig e.V., CABL e.V., Gender Competence Centre Saxony, Netzwerk Vorsorgendes Wirtschaften, the feminist strike alliance Leipzig, Care Revolution Leipzig, Buurtzorg Connewitz and Ver.di. Come and discuss with us!

The double working day from the perspective of feminismo comunitario (communitarian feminism); a feminism that regards patriarchy as the base of all existing oppression against women; as a historically and culturally global structure. With the speakers Denise Braz and Catalina Ariza we would like to reflect on how to overcome the barriers that have differentiated the situation of oppression of women between the global South and the global North for centuries.

Film screening and talk with Women in Exile and friends

Women in Exile would like to watch their short film „Testimonials from the uterus“* with you and talk about it. The film is part of her project „Health care for all without discrimination“. Here, three refugee women talk about their experiences in the health care system and about how difficult it is as asylum seekers to get adequate medical care. Experts who support refugees also share their observations about what it means to be a Non-Citizen* in the German health care system.

*Directed by: Daniellis Hernández Calderón with Women in Exile

When people talk about work or the job, they often lose sight of something fundamental: Being there for others, caring for oneself and others is vital work – called „care“ work. However, it often remains invisible and is not valued very much.
What would happen if care work were at the centre of economy? If the needs and livelihoods of all mattered, not only within national borders but worldwide?
We have developed tools for education with feminist approaches to answer these questions in a participatory and playful way in educational contexts. Together we will try out and discuss some of these methods during the workshop. For all those who are active in educational work or would like to learn educational methods.

If one leaves the European context and looks at the situation of women from a global perspective – which is urgently needed especially in the context of migration and flight – apparently clear feminist positions complicate themselves. Further forms of oppression and power relations are added. Feminists worldwide are mostly united in the fight against patriarchy, while at the same time, depending on their geopolitical location and class, contradictory positions clash in a conflictual way. In a globalized world, transnational contexts must be discussed anew, even in feminist fights. The workshop will provide space for this discussion.

The right of all people to health care has been embedded in the Universal Declaration of Human Rights since 1948. But in reality, access to health care is unavailable for many social groups. Asylum seekers, illegalised refugees, EU citizens fail due to the barriers put in their way by german authorities. Fear of deportation or piles of debt make people avoid going to a doctor, which can cause treatable illnesses to become chronic and sometimes life-threatening. The Medinetz Leipzig e.V. would like to discuss this grievance with you in the workshop. No previous knowledge is necessary. We expect a maximum of 24 participants.

Slut-shaming and „white-girl complex“ are symptoms of a misogynist, patriarchal, heteronormative and racist society. We see that power structures successfully divide us from each other, from our friends, mothers, and most of all from ourselves.
(Queer-) Feminist fights should unite and liberate us. But who is even capable of striking? And what does it mean when we hear about white or trans-phobic feminism and intersectionality is exchanged for exclusivity? That is why we want to take the space to celebrate ourselves and our bodies, which exist outside the norm, and find a kind way of dealing with ourselves and our fellow human beings. The workshop will be held in German.

Here you can inform yourself about lived alternatives and campaigns for a socio-ecological transformation and/or get some inspiration for your own activist work. Participants so far: feminist strike alliance Leipzig, Rosa Linde e.V., ADB anti-discrimination office Leipzig, Genderkompetenzzentrum Leipzig, LAG Queeres Netzwerk Sachsen, Medinetz Leipzig e.V., CABL e.V. and others.

Does it make sense to strike invisible and unpaid care work? -Yes, absolutely, but how? It’s hardly possible not to cook food anymore, not to clean the apartment or not to listen to your friends. Should we redistribute this work and thus contribute to a higher valorization? In individual and group work we take a look at our everyday life, what is understood as care work and which possibilities there are to strike and thus challenge a transformation. We want to look for possibilities that go beyond heteronormative practices, because care work exists in every relationship. No previous knowledge is necessary, but experience is desirable.

Basic Income is one of the main topics in the political agenda but little does the general public know about it: its different types, its risks, advantages and challenges. In this practical workshop, we will discuss different possibilities a basic income can suppose to the all the population, but most importantly, to women. The workshop will be highly collaborative as we want to hear your proposals, opinions and ideas on how can we advance on providing a basic income for all. So, no prior knowledge is required. The workshop will be held in English and German.

Together we want to fortify ourselves for the international Women‘s march! We would like to end the week with you on a nice breakfast and take a look back at the feminist week. Feel free to bring food so that we can share a big breakfast buffet.